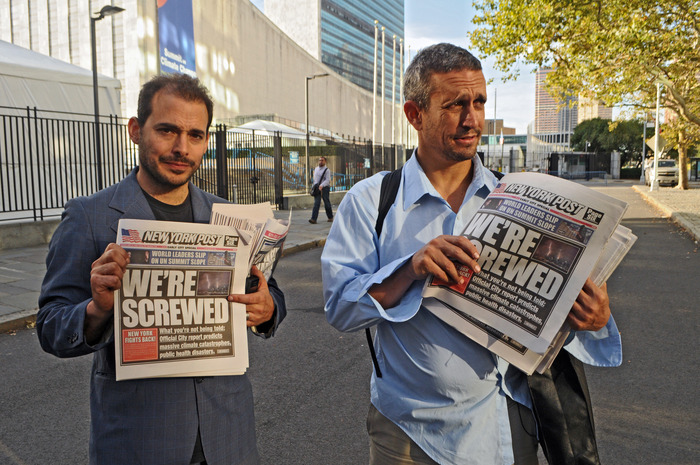 The Yes Men (Andy Bichlbaum and Mike Bonanno) are an activist duo known for their outrageous satirical interventions at business events, on the internet, television, and in the streets. Their award-winning documentaries, The Yes Men and The Yes Men Fix the World–official selections at Sundance, Toronto, Berlin, and SXSW, and broadcast on HBO and many international TV outlets–chronicle the their mind-blowing pranks that expose and publicize vital issues at critical times. They have authored several books, lectured internationally on art and social change, and are founders of the Yes Lab, an educational organization devoted to training next-generation activists.The Yes Men are a group who use any means necessary to agree their way into the fortified compounds of commerce, and then smuggle out the stories of their undercover escapades to provide a public glimpse at the behind-the-scenes world of big business. The stories are often both shocking and hilarious. They have been called “the Jonathan Swift of the Jackass generation” by author Naomi Klein. The Yes Men have impersonated World Trade Organization, Dow Chemical Corporation, and Bush administration spokesmen on TV and at business conferences around the world. They do this (a) in order to demonstrate some of the mechanisms that keep bad people and ideas in power, and (b) because it’s absurdly fun. Their main goal is to focus attention on the dangers of economic policies that place the rights of capital before the needs of people and the environment. Right now they’re focused on passing carbon emissions laws in the USA. As the Yes Men, they use humor, truth and lunacy to bring media attention to the crimes of their unwilling employers. Their second film, The Yes Men Fix the World, won the audience award at this year’s Berlin Film Festival, the Grierson Award for Most Entertaining Documentary, and went on to become a smash box-office sensation, only just barely surpassed by Avatar. They introduce theyselves in this film, The Yes Men, directed by other people, but starring them.