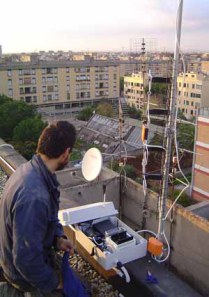 Telestreet is an Italian movement that set up pirate TV stations in several metropolitan areas in Italy. The movement has started up in Bologna with a small transmitting station, OrfeoTv, which was founded by media theorist and activist Franco “Bifo” Berardi; since June 2002, this micro-TV has been broadcasting for a few hours a day within a range of 200 metres. Telestreet phenomena became a network of close to 200 micro pirate TV transmitters that begun in the summer of 2002 to counter the media monopoly of Silvio Berlusconi. Perhaps the most interesting tactical media initiative of recent times, the TeleStreet network combines both old and new media, lo-tech and hi-tech.There are now nearly one hundred mini TV stations across Italy. Their transmitting hardware contains slightly modified receiver electronics. The telestreet are usually promoted by organizations, groups or individuals who use the facility for television and social utility of group profit, with the aim of making the television a free communication tool like a newspaper or a website.